“THROUGH THE YEARS, THE MOSQUITO FLEET DOCKED HERE AMONG OTHER SHIPS. ENRICHING THE CITY AND NATION, AND BLENDING ASIAN AND EUROPEAN FISHER CUSTOMS INTO AMERICANISMS. THE INTERNATIONAL CUSTOM OF BLESSING FISHING FLEET IS OBSERVED YEARLY IN GALVESTON.”

– excerpt from the historical marker “PIER 19 MOSQUITO FLEET BERTH”  installed by the Texas Historical Commission at Pier 19 in Galveston.

We often meet people in Houston who think our project is happening in Galveston, Houston’s neighboring city to the south. We always let them know that the project is actually happening on Galveston Bay, not Galveston. This doesn’t always clarify things. “But you keep your boat in Galveston, right?” has sometimes been the next question. “Actually, we keep it in San Leon, which is a town on the bay, in between Houston and Galveston,” is what I find myself saying in response, which usually does the trick, even if folks don’t really know where San Leon is.

None of this is really very surprising. If we’re doing anything involving shrimping in this region, we might as well be in Galveston, such is the lasting historic connection between shrimping and place there. Galveston’s bay shrimp boats, popularly known as the Mosquito Fleet, still tie up at a prominent spot on the city’s harbor, just as they always have, it seems. There may be fewer boats these days, but they still command a large presence in the tourist’s gaze and share a well-trafficked area of public waterfront with museums, parks, restaurants and seafood markets. It seems that not many other working fleets can claim that kind of real estate these days.

Over the summer, we got an email from some folks in Galveston who have revived the Galveston Island Shrimp Festival and Blessing of the Fleet (now called the Blessing of Da’Feet) for the last two years and were planning to do it again this year. And they wanted our help. Really? We weren’t immediately sure how we could help. Afterall, our boat was still sitting on blocks at the boatyard and we had no idea when we’d be launching, let alone learning how to catch shrimp. The latest humbling moment in a seemingly never-ending string of humbling moments. But they thought the intent of our project might dovetail with their festival so after a lunchtime meeting in Galveston, we happily agreed to at least host a booth where we could share our project and perhaps some of the inspiration behind it. And maybe participate in their Gumbo Cookoff, fresh off our 17th place finish at the last Blessing of the Fleet cookoff in May. Participating in the festival’s boat parade and Blessing of Da’Feet seemed amazingly unattainable, and frankly we were still suffering from the letdown of the last Blessing event at the Kemah Boardwalk. Even if our boat was seaworthy and we were capable of piloting it the 2 hour ride to Galveston, would this Blessing be any more legitimate than the last one? (see our blog entry “Mixed Blessings” below for further reading on this.)

Photographs of Galveston by Geoff Winningham, from the book Going Back to Galveston

What a difference a few months make.  By early September our string of boat problems seemed to be dying to a murmur, and if we squinted, it looked as if our boat might actually be ready for the parade and blessing. Not only that, but our longtime sentimental attachment to Galveston was more palpable than ever.

Houston and Galveston are both bookends to this region, but more than that they seem to represent polar ends on the spectrum of regional cultural ethos. On our occasional trips to Galveston, we easily succumb to all the qualities which make it not Houston: its slowness, its weathered patina, its inability to accept change, its textured landscape of so many visible layers of history. It was the original big city in this region, and while it’s port and economy may no longer rival Houston’s, the city still seems to sit more prominently at the region’s threshold, both historically and geographically, where the Gulf meets the Bay.  So the idea of going to Galveston, whenever we can find the time, always offers of a healthy dose of cultural resonance.

Just such a time occurred about a week before the festival when we drove down to Galveston to attend the required captains meeting for the boat parade at the Joe’s Crab Shack restaurant on Pier 19. With its faux-swamp-shack-meets-carnival-fun-house look and overpriced fried seafood, we had never had much urge to go to this place in a city full of great seafood joints. Yet, here we were, entering what always seemed to be the inauthentic stepchild of Pier 19. Under new ownership and newly rebuilt since being demolished by Hurricane Ike, the place has transformed itself in the last year. With free drinks and an eclectic crew of Galveston locals gathered on the restaurant’s deck, we quickly got over our hangups of the place and struck up a conversation.

By the time we left the captains meeting, we somehow managed to learn nothing about the upcoming boat parade procedures, our original reason for showing up. But we did met a couple friendly Galveston shrimpers who shed some light on the history of this parade. Apparently it was a community of shrimpers who organized the parade and blessing of the fleet for decades in Galveston, but more recently the City of Galveston assumed control of the event and it died 2 years later. We were participating in the second-coming I suppose. We also learned a great deal more about the typical routine of shrimping at the entrance to the Galveston Harbor, apparently the standard spot for Galveston shrimpers. Before long, all we wanted to do was to move our boat to Galveston.  It all just sounded so much more mellow, straightforward and more accessible than everything about shrimping in the mid-bay area where we are now. Well, nothing is really that straightforward for us, but it was easy for us to imagine that in this small community of Galveston shrimpers, with their one regular shrimping spot practically in view of the dock, everything would become easier. Driving back to Houston, reality of course set in, and we had to shelve our dreams of Galveston, at least until the actual boat parade the following week. 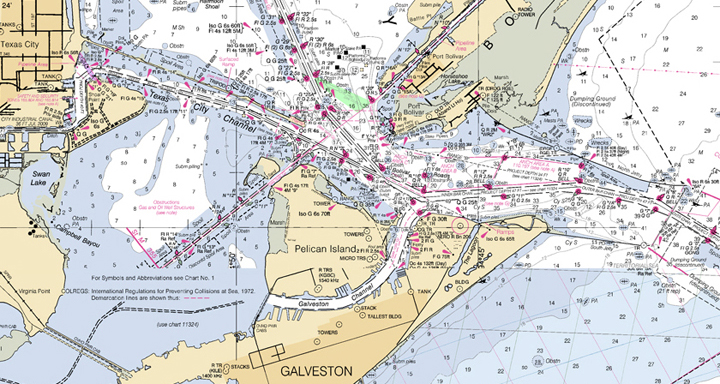 On the morning of September 23, we departed San Leon for Galveston by shrimp boat, a day before the the parade. Though not terribly far (we can usually see the hazy silhouette of Galveston’s skyline from our shrimping grounds), the trip would have us navigate unfamiliar waters and more marine traffic than we’d ever faced, specifically at the mouth of the bay, where the Houston ship channel meets the Galveston ship channel meets the Intercoastal Waterway meets the ferry channel from Galveston to Bolivar. The nautical chart above hints at how congested this area can get. So we took our time getting there. We detoured to a shrimping spot near the Texas City Dike, at the encouragement of John from the boatyard. The spot had come to him in prophetic dream over the summer in which he saw us catching a massive amount of shrimp. A mythical honey hole or a true shrimp bonanza? We had to find out. As it would happen, reality was not on our side. Our try-net, never shy of prophecy itself (as it’s main function is to test the waters and tell us whether it’s worth dropping the big net in) quickly grassed up and it was clear there was no honey hole here on this day. We continued on our way.

Photographs by Stacey Farrell, before and during the parade.

As this story will attest, we did make it safely to Galveston Harbor and managed to pilot the boat into a slip at the tight marina on Pier 19, despite nearly clipping the stern of a docked charter boat starting to fill up with passengers. Once we could stand on the dock and appreciate that our boat was tied up at the site of many a Galveston postcard, it felt as if our boat had come home. Indeed, we would join the Mosquito Fleet, if only for a weekend.

The next day was climactic. We arrived early, about 4 hours before the parade, to hastily attach nearly 1000 feet of red, white and blue pennant flag streamers from bow to stern. Not only were we preparing for a parade and a blessing, but also a contest for best decorated vessel, and we thought we had an outside chance of taking that honor (and the prize money that would come with it). But we were mistaken. This was not the last parade we had witnessed back in May. It seemed that a greater number of shrimp boats had turned out this time– a great thing for the event, a terrible thing for our chances of winning the pageant. Virtually every boat seemed to be gunning for the top honors. Ultimately it was the Tiffany Leann II that would take the prize– just as it had back in May at the Kemah parade–with its over-the-top Vegas themed decorations, complete with Elvis impersonator, dancers and mega sound system. But lest we forget, this was still a parade of many boats, each adding something unique to the event, and that included us. We also got blessed, by a real Catholic priest standing at the bulkhead at Pier 21, as we passed the cheering crowds. It was a total thrill. Joined by a handful of friends on deck, we made a mental note to  invite even more people along next year to fill out the onboard celebration.

I’m not sure if it was just the fact that we were in Galveston, or the turnout among other shrimp boats that seemed impressive (given this was taking place on a perfectly good work day), but this parade and blessing felt very satisfying. Sure, it was still taking place in the midst of a big festival with throngs of tourists and not necessarily the local tradition of yesteryear, but this is the Galveston of today. People come to Galveston to reconnect with the past and its bygone traditions. I suppose that’s what we were doing too.