You might think that after 6 arduous months of restoring our shrimp boat, we might ring in the first day of actually shrimping with some of the pomp and circumstance that marked our christening of the F/V Discovery. But alas, this day came and went with no fan fair, just another day at the office, which seemed perfectly fine and perfectly appropriate.

On a typically hot morning in late August, we arrived at the boatyard and were greeted by John with a very clear message: “Y’all need to stop messing around and just go shrimping.”  We had just decided to slow down a little and work at a more reasonable pace but we decided to ride the momentum of John’s push to get going.  The boat was nearly ready for use but we had been laboring over painting details, rewiring electronics, and setting up the rigging.  We began to make our final preparations for setting off from the dock: finishing electrical work for our running lights, hanging our day marker, applying our permit and registration stickers, double-checking our life-jacket count, fixing the bow roller for the anchor, more finish work on our bait tank, some minor cleaning of the cabin and a final effort to return all of the tools we had borrowed from John’s shop over the last 6 months.  The next morning it was time to get our trawl doors and nets on board and to set the tickler chain.  We were done in a few hours and after a quick trip to the local Subway sandwich shop for lunch, we were ready to go. And so, on an unremarkable afternoon in late August, we embarked on something that seemed remarkable only a few weeks before: leaving the comforts of the boatyard and finally steering our boat cautiously along Dickinson Bayou toward Galveston Bay with a boatload of excitement, uncertainty, anxiety and cautious optimism.

We were not prepared for this day in any real sense and really just going with the flow of our trusted advisors.  Our main guide on this part of the journey became Gary Jones.  We had officially partnered with Gary to help us run the boat and teach us how to shrimp. This is the same Gary who helped us put our boat back together on several occasions with assistance on welding, fitting and general trouble-shooting. Eager to get back to shrimping after a long hiatus, he seemed like the right captain to join us.

Our first stop on this maiden voyage was Hillman’s Seafood, a convenient spot along Dickinson Bayou to fill up on diesel and ice, and the home of the largest bay shrimp fleet in the area.  After haggling over diesel fuel costs, we filled up our newly installed repurposed 18-wheeler truck tanks and were on our way.

From Hillman’s we headed out into the bay to test the boats systems and the newly installed nets, doors, and rigging. We really did not know what to expect on this first day but it was just a test. We were entering a shrimping season nearly 3 months late, in a year of reportedly low shrimp numbers due to historic drought conditions, on a boat that had been thoroughly overhauled, with rigging that had not yet been tested, and with a tired old net that we inherited from the previous owner. Not to mention our own inexperience and our captain getting reacquainted with the profession after nearly 15 years of being off the water. Simply not breaking down and working the kinks out of the equipment was all we hoped for.

We headed out of Dickinson Bayou and into the larger Galveston Bay and made a quick “try” with our smaller net at the flood gate of Moses Lake and then headed off across the Ship Channel to test our big net. We were watching closely as Gary put the net in the water and then lifted the heavy trawl doors over the stern with our re-built winch.  Gary let out 200ft of cable, locked down the winch, let down the drop block, and we were shrimping!  But our moment of bliss was shortlived. After a few minutes, Gary rushed back from the cabin exclaiming that we must pull the net up because the engine was about to die.  He was able to hear the engine missing, for some reason starved of fuel.  With the loud racket of the Detroit 871, this was not a sound we were at all attuned for.  The winch that pulls in the net is run by a hydraulic pump off the engine; if the engine were to quit with the nets in water we would be screwed.  Gary started reeling in the nets right away and sure enough almost as soon as the trawl doors were onboard the engine died. We threw the anchor overboard and popped the engine hatch.  In all this commotion we forgot that in the net were the first few shrimp caught by the F/V Discovery. There are very few upsides to getting stuck in a boat out on the bay, but we did get to see that our anchor works great and we did learn quite a bit of trouble-shooting that is essential to running the boat. It was clear that the engine was not getting fuel and that both fuel filters had been sucked dry, but our tanks were oddly full.  With the anchor set and no other immediate hazards around us, we set about solving the problem. It wasn’t by any means an immediate discovery but with Captain Gary’s help, we ultimately realized that our cheap outboard priming bulb was collapsing under the pressure of the fuel pump and preventing fuel from reaching the engine. In the course of a long, hot, stress-filled hour, we did manage to get the engine running by priming the system. Fuel began to flow again.  Only slightly more exhilarating than catching our first shrimp was the feeling of getting our engine running again after an hour stranded at sea!

A dock has never looked more comforting than it did on this first day. Returning from the bay, with a few shrimp in hand and a boat that we had coaxed back to life, the promise of this work is still alive.  We were now ready for a real shrimping day and made plans to meet Gary at the dock at 4am the next morning to start in earnest. 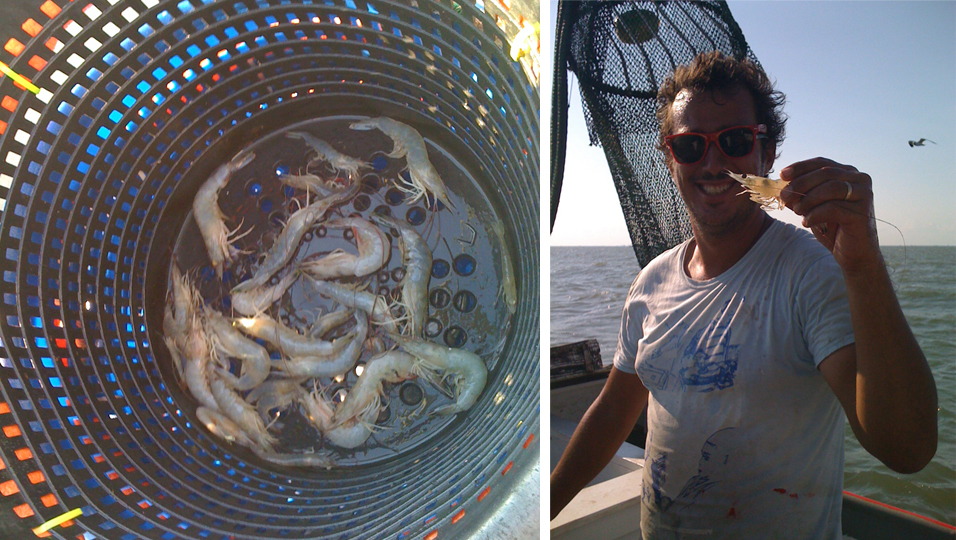